SchneidersBuero is organizing the BOOTH # 5014 (Hall B) on NAMM 2016 for Doepfer, MFB, Vermona, Endorphin.es, AJH synths, E-RM, Haken audio, Tegeler Audio Manufaktur and others. It will hopefully be a nice meeting point for friends and us, you re very welcome.

I  will not be there myself (HerrSchneider) this year, but you can meet up with the most competent staff of SchneidersLaden (Carlo and Paul), ALEX4 (Rene and Jan) and you could talk about the upcoming SUPERBOOTH with Sebastian Baumann if you like. 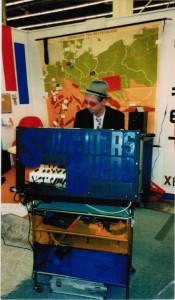 After more than ten years of exhibitions on Musikmesse Frankfurt for either ALEX4 or as the SUPERBOOTH we found our own style to present products we like.

The stands we made and make are usually crowded and popular, it is lots of work to exhibit for us and with us, but our partners confirmed best results always. 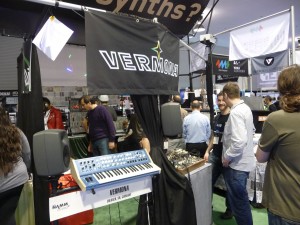 NAMM show for the very first time. We could manage to be direct neighbors with a community of american eurorack manufacturers up in Hall A, the NAMM themselves made the syntheiszer companies a theme with an extra press release. 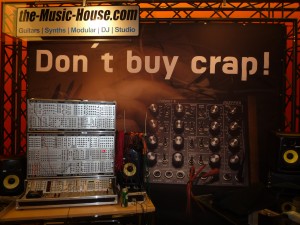 In February 2015 we made a stand on the Dancefair in Utrecht (with the help of a local retailer) showing and introducing a bigger modular system by Doepfer and some rare news and specials in between the two big trade shows in the US and Germany.

In April 2015 we will show nearly 40 different brands from all over the world on a collective stand in Hall 5.1 on Musikmesse again. Afterwards manufacturers are invited for a workshop series in our Spiegelsalon to be releases online asap.